After beating Qudus Wahab with a nifty spinning hook shot on Michigan’s previous possession, Hunter Dickinson gestured for the ball in the post.

Dickinson was one step ahead of the visiting Terps all evening long Tuesday at the Crisler Center, as a 21-point, 6-rebound performance along with a career-high 6 assists from the Wolverines’ big man helped lead Michigan past Maryland men’s basketball, 83-64.

Both the Terps and Wolverines entered Tuesday’s conference battle hungry, with each team desperate to snap multiple-game losing skids.

However, despite the Terps’ fresh offensive look, their turnover woes persisted early in the opening frame.

A plethora of careless offensive possessions stymied any semblance of Maryland’s momentum, as 12 of Michigan’s 39 first half points came off of the Terps’ 10 turnovers. Maryland guard Eric Ayala missed all four of his first frame 3-pointers in a quiet two-point half, while Fatts Russell pitched in just two points of his own.

And with Manning’s squad struggling to find its footing on either side of the ball, Dickinson and the Wolverines pounced on the floundering Terps.

Three Wolverines scored in double-figures as Howard’s squad raced out to a 20-point halftime edge. In just 13 minutes, Dickinson racked up five points, four assists and three rebounds as Michigan headed to its locker room holding a comfortable 39-19 lead.

Ayala quickly awoke from his first half slumber early in the second half, converting on two quick 3-pointers to begin chipping away at his team’s sizable deficit. Ayala and forward Donta Scott combined for 41 of the Terps’ 64 total points, barely keeping Maryland afloat on the road in Ann Arbor.

A Julian Reese 3-pointer gave the Terps a glimmer of hope midway through the second half, as a quick barrage of offense trimmed the Wolverines’ 20-point lead to 13 points.

But, as was evident all evening long, Dickinson had an answer for Manning’s squad.

16 of Dickinson’s 21 points came in the second half, as the Terps were unable to slow the dynamic center by the basket. Finding his patented left-hand finish on multiple occasions, Dickinson blew the game back open despite Ayala’s 20-point second half output.

Dickinson’s 21 points, along with double-digit outbursts from Houstan, Moussa Diabate and Devante’ Jones, broke the Terps’ spirit down the stretch.

And as the final buzzer sounded, the Wolverines had run away with a dominant 83-64 victory, sending Maryland back to College Park with its sixth conference loss in an increasingly forgettable season. 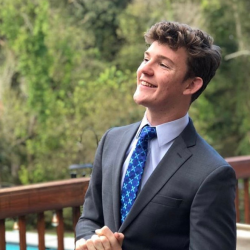